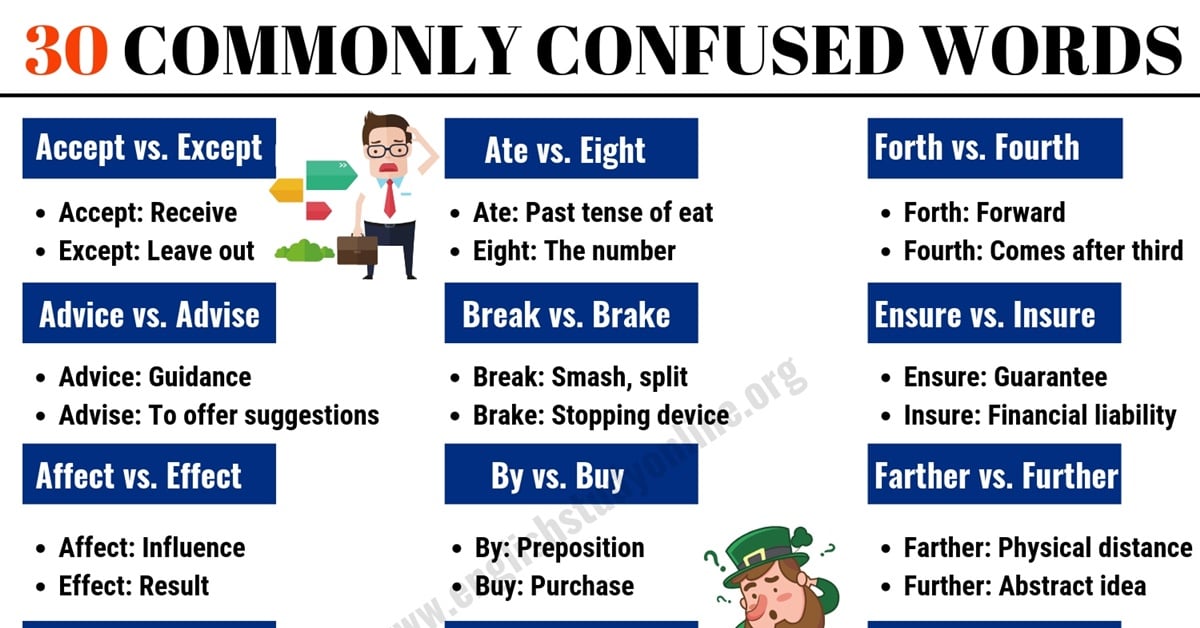 Commonly Confused Words in English! In this lesson, you will learn the list of popular 30 English word pairs that confuse absolutely everyone with their meaning and examples with ESL printable infographics.

Here is the useful list of English word pairs that make you confuse:

What is the difference between accept vs except?

Accept means to agree to take something or to say yes to an offer or invitation.

Except means not including; but not. Except also means with this difference or in this case only

Advice is a noun which means guidance or recommendations offered with regard to prudent future action.

Advise is a verb which means to offer suggestions about the best, to give some advice

Affect is a verb which means to have an effect on; make a difference to.

Effect is a noun which means a change which is a result or consequence of an action or other cause.

Allowed means give (someone) permission to do something.

Aloud means audibly; not silently or in a whisper.

Allude means suggest or call attention to indirectly; hint at.

Elude means evade or escape from (a danger, enemy, or pursuer), typically in a skillful or cunning way.

Ate is past of “eat” which means to put or take food into the mouth, chew it and swallow it:

Eight is equivalent to the product of two and four; one more than seven, or two less than ten; 8.

Break means to separate or cause to separate into pieces as a result of a blow, shock, or strain.

Brake means to make a moving vehicle slow down or stop by using a brake.

By is a preposition which is used to show the person or thing that does something:

Buy means to get something by paying money for it:

Capital means the most important city or town of a country or region, usually its seat of government and administrative center.

Capitol is the building in which the USCongress meets.

Coarse means rough or loose in texture or grain.

Course a set of classes or a plan of study on a particular subject, usually leading to an exam or qualification

Emigrate means leave one’s own country in order to settle permanently in another.

Immigrate means come to live permanently in a foreign country.

Ensure means make certain that (something) shall occur or be the case.

Insure means arrange for compensation in the event of damage to or loss of (property), or injury to or the death of (someone), in exchange for regular advance payments to a company or government agency.

Farther means to a greater distance.

Further means to a greater distance or degree, or at a more advanced level.

Fewer means used to emphasize how small a number of people or things is.

Less means a smaller amount of; not as much.

For is a preposition which means intended to be given to.

Four is an equivalent to the product of two and two; one more than three, or six less than ten; 4.

Forth means out from a starting point and forward or into view.

Foreword is a noun that means an introductory note or preface.

Forward is an adjective or adverb that means toward the front.

Hear means perceive with the ear the sound made by (someone or something).

Here means in, at, or to this place or position.

Difference between loose vs. lose in English:

Loose means not firmly or tightly fixed in place; detached or able to be detached.

Lose means be deprived of or cease to have or retain (something).

Piece means a portion of an object or of material, produced by cutting, tearing, or breaking the whole.

Plain means not decorated or elaborate; simple or ordinary in character.

Plane means a flat surface on which a straight line joining any two points on it would wholly lie.

Principle means a fundamental truth or proposition that serves as the foundation for a system of belief or behavior or for a chain of reasoning.

Principal means the person with the highest authority or most important position in an organization, institution, or group.

Quite means to the utmost or most absolute extent or degree; absolutely; completely.

Stationary means not moving or not intended to be moved.

Stationery means the things needed for writing, such as paper, pens, pencils, and envelopes.

Than means introducing the second element in a comparison.

Then means at that time; at the time in question.

What is the difference between to and too in English?

To means used before a verb to show that it is in the infinitive.

Weather means the state of the atmosphere at a place and time as regards heat, dryness, sunshine, wind, rain, etc.

Whether means expressing a doubt or choice between alternatives.

Which means asking for information specifying one or more people or things from a definite set.

Witch means a woman thought to have magic powers, especially evil ones, popularly depicted as wearing a black cloak and pointed hat and flying on a broomstick.

Who means what or which person or people.

Whom is used instead of “who” as the object of a verb or preposition. 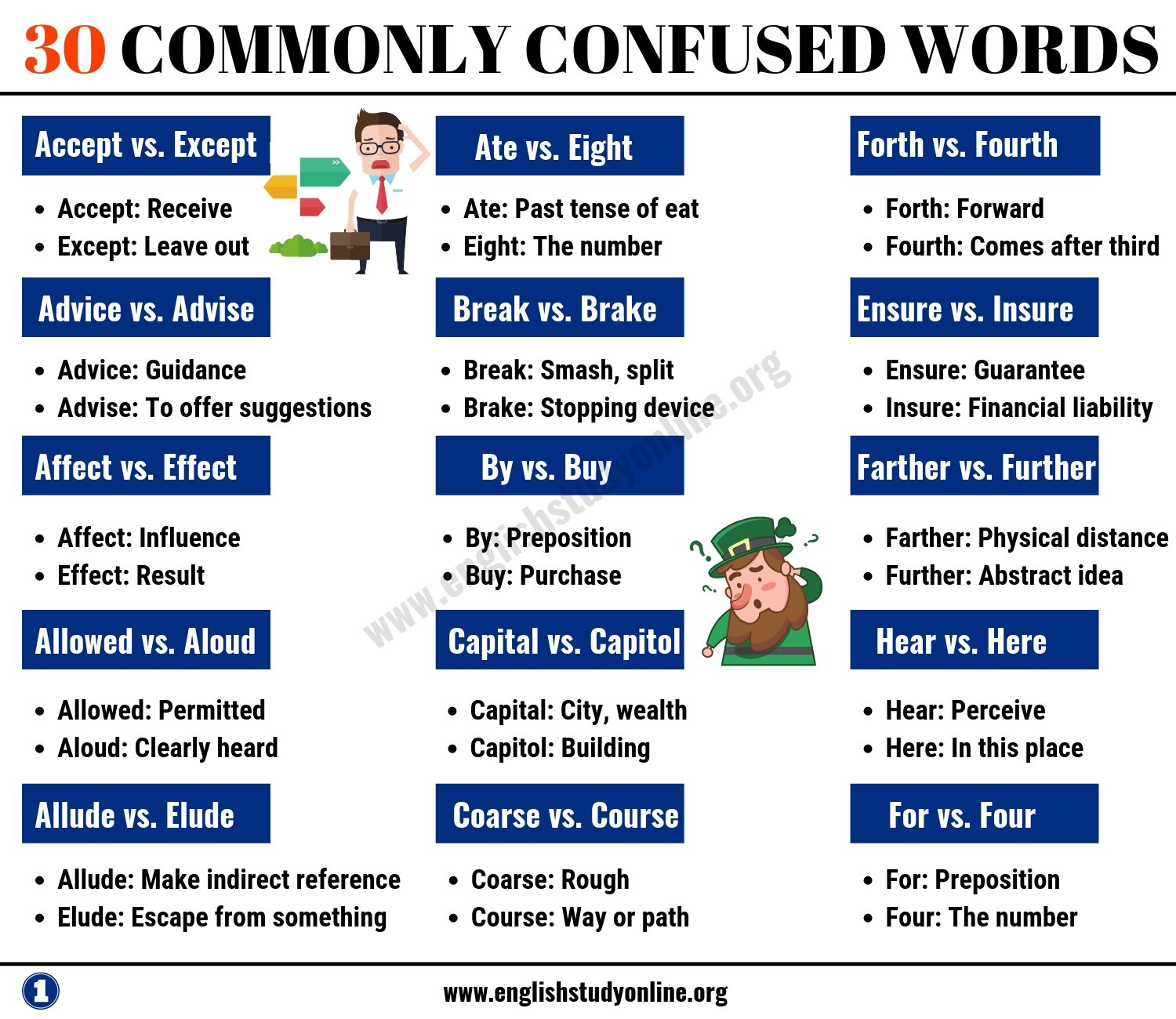 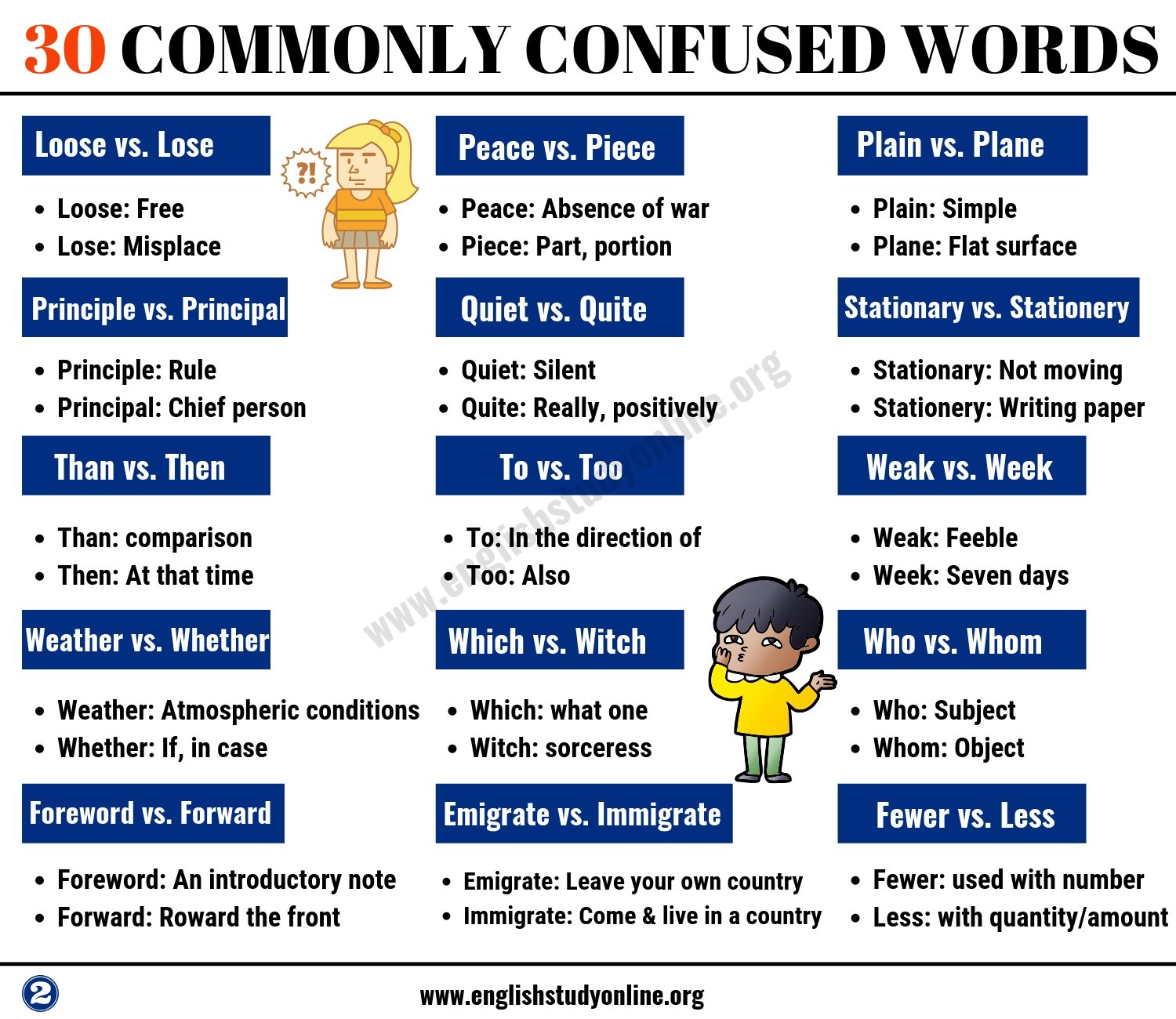 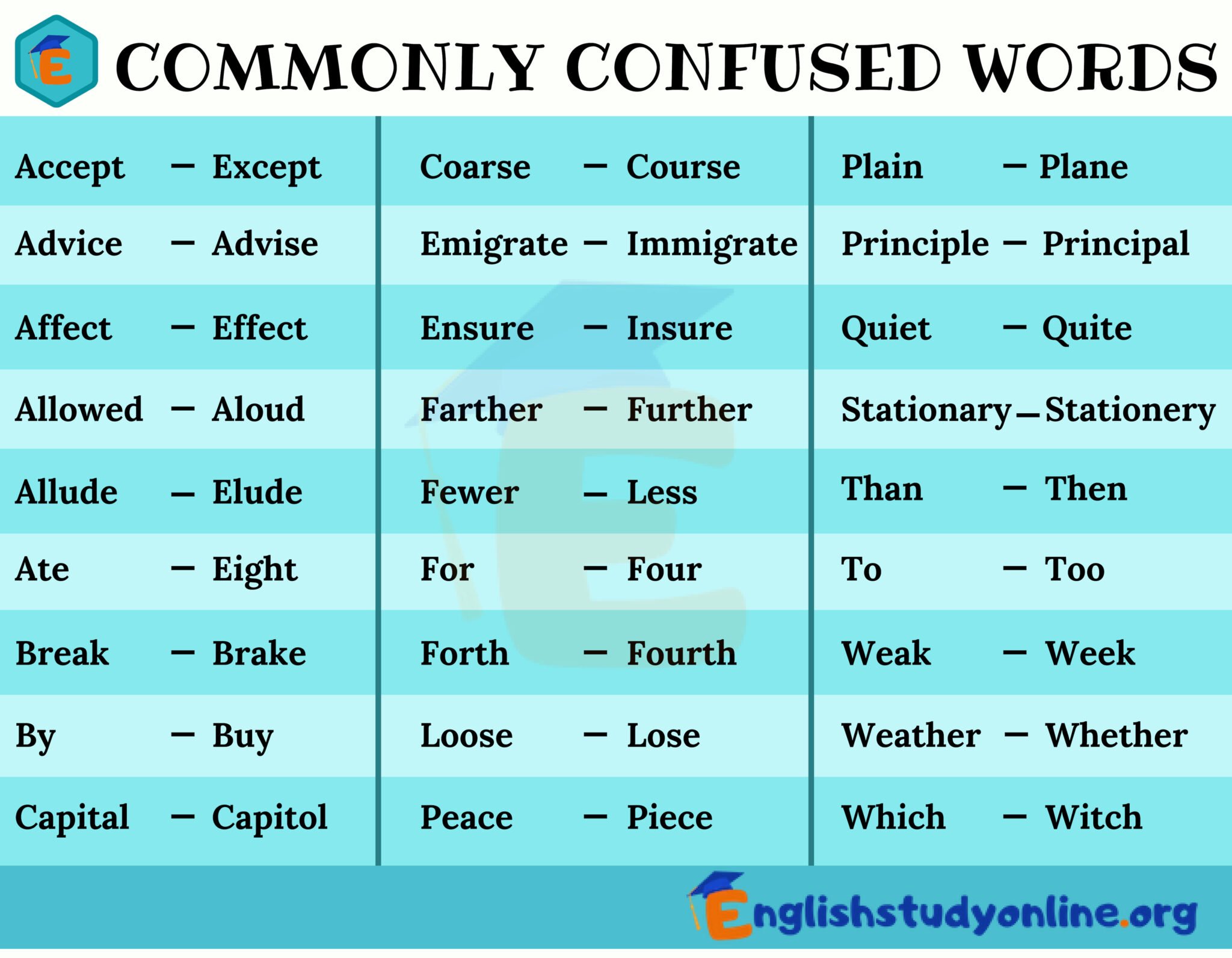 Hello every one,
It’s a great pleasure to find and read such interesting and useful articles you’re providing us as readers with .As i’m a teacher of English ,I’m so lucky to get such documents and share them with my colleagues.
Thanks for the efforts you’re doing

As a student this is a very useful tool that I will continue to use!