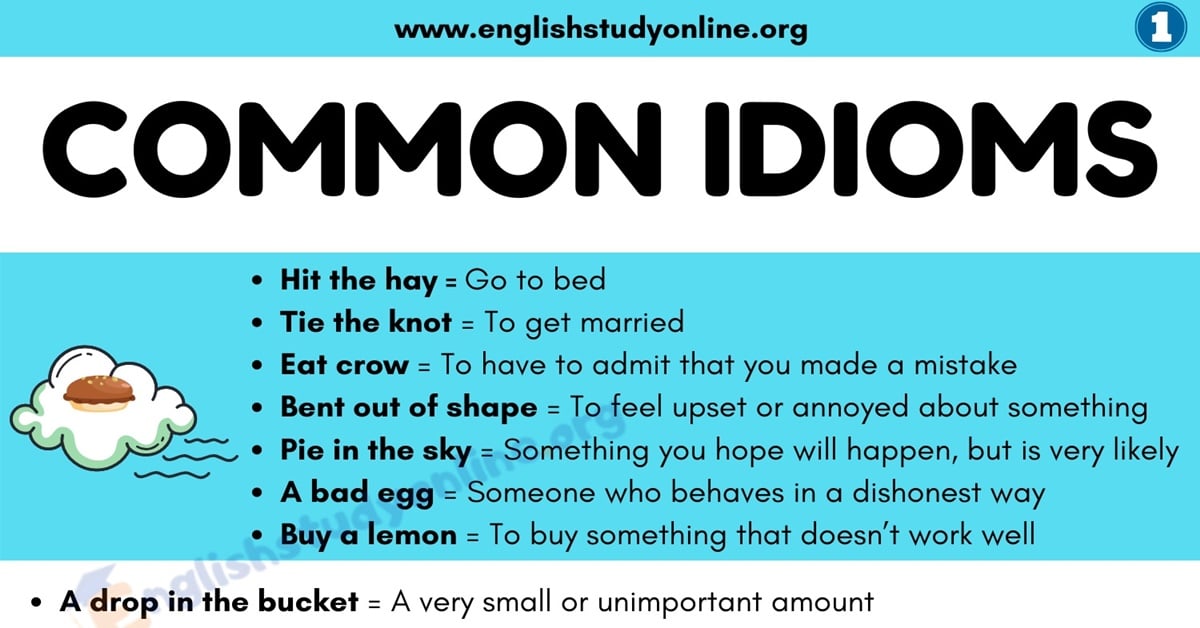 Idioms are an integral part of any language, and English is no exception. These phrases, which cannot be understood literally, add color and nuance to our communication and often have a cultural or historical significance.

In this article, we will look at a list of 100 popular idioms in English, along with example sentences showing how they are used in context. Whether you are a native English speaker or learning the language, these idioms will help you expand your vocabulary and understand everyday expressions more fully. So let’s get started!

What Is An Idiom?

Take some examples of idioms to understand more what it is. “Break a leg” – This is a way to wish someone good luck. “To shed crocodile tears” means to cry about something but without actually caring or another example is “It’s raining cats and dogs” means it’s raining heavily.

So why should you invest the time and effort in learning idioms? For native English speakers, idioms are an integral part of the language and are used frequently in conversation and media. Understanding idioms will help you communicate more effectively and understand the meaning of what others are saying.

For English learners, idioms can be especially challenging, as they often do not translate directly from one language to another. However, mastering idioms is essential for becoming proficient in English and being able to communicate naturally with native speakers.

Here is the list of popular idioms with example sentences to help you understand more the meaning of each idiom.

Bent out of shape

Pie in the sky

A drop in the bucket

To kill two birds with one stone

I have butterflies in my stomach

Get up on the wrong side of the bed

A blessing in disguise

A piece of cake

Beating around the bush

Get out of town

Hang on a second

On your high horse

As cool as a cucumber

Dressed to the nines

Over the hill/ Old as the hill

Nutty as a fruit cake

As fit as a fiddle

Go under the knife

In the same boat

Put the cart before the horse

No room to swing a cat

A cat has nine lives

Meeting of the minds

Mad as a hatter

Down in the dumps 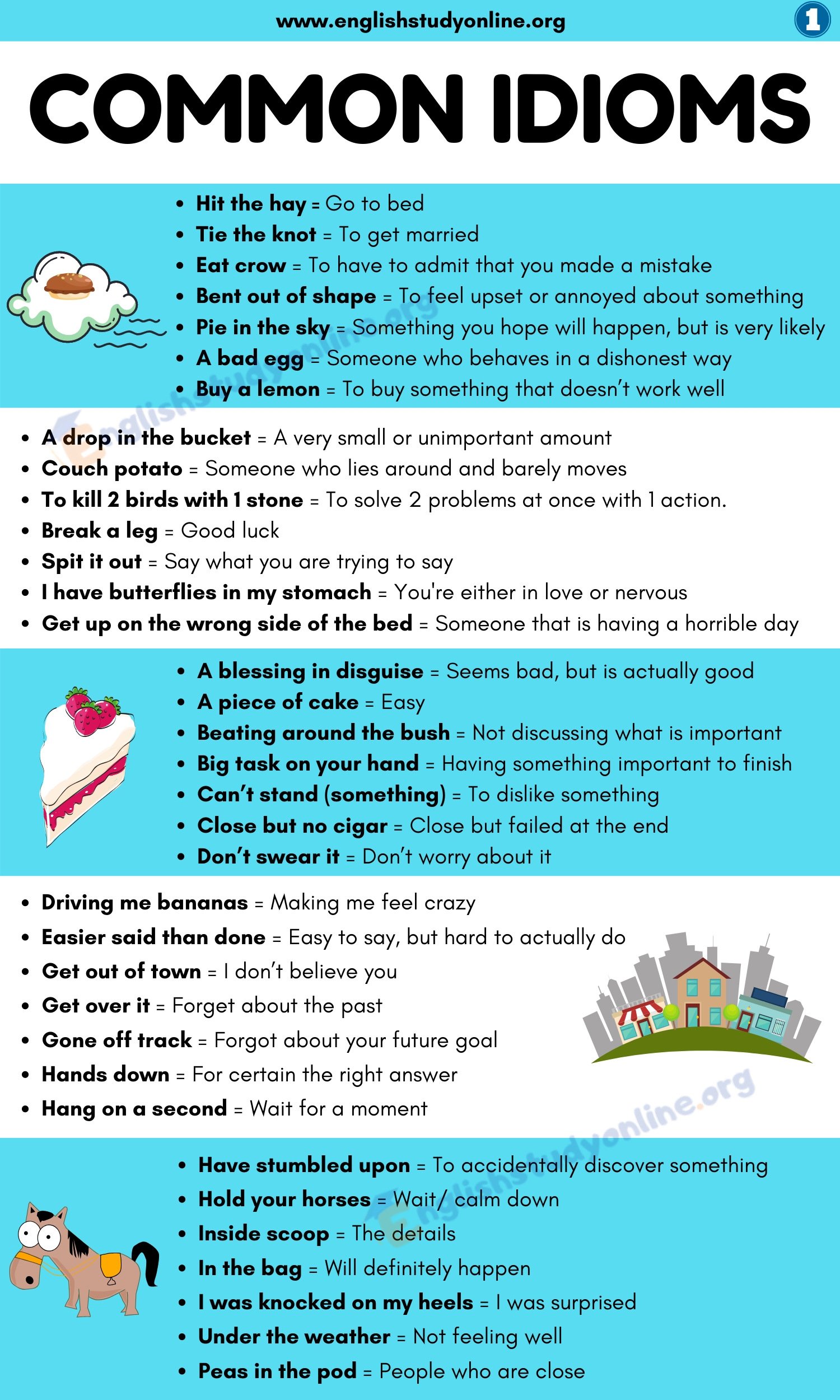 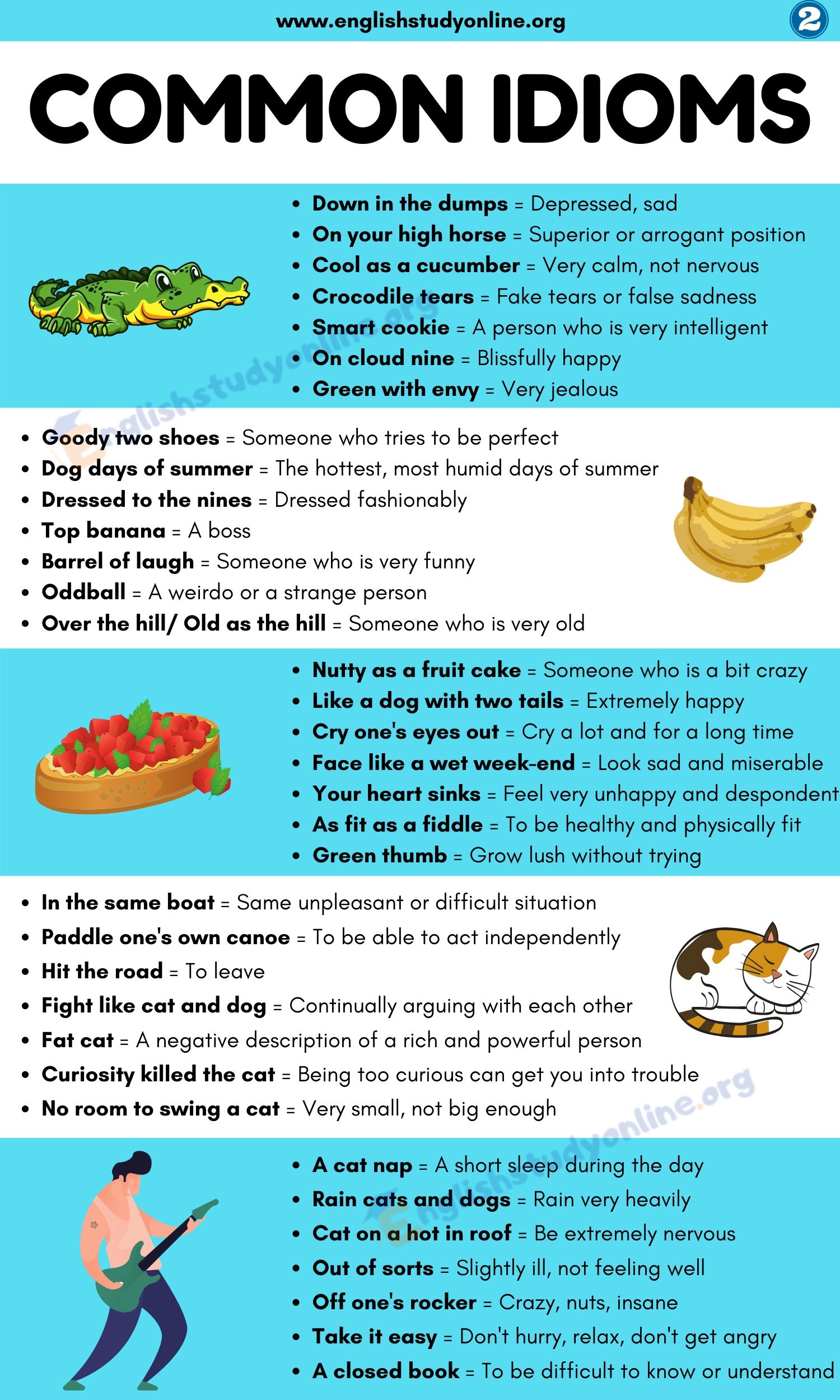 A very handy tool to use when you’re reading a book, and the author uses an idiom you can’t understand! Thanks a million!

i got to use it in school 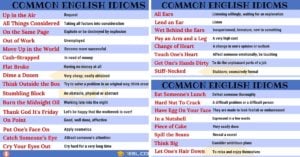 great i can get some exsamples

A USEFUL LIST THAT’S INTERESTING AND EASY TO RELATE TO, AND THEREFORE, REMEMBER.
THANK YOU!

This website has lots of idioms that I can do for class today!!!!!

i love it pls send more

“Cat on a hot tin roof” is the proper idiom. Tin (metal) roofs get hot on a sunny day.

Beating around the bush I will not discussing about what is something important.

I like studying English language, especially regular and irregular verbs. 📚😷

Very popular idioms , thanks for the hard work