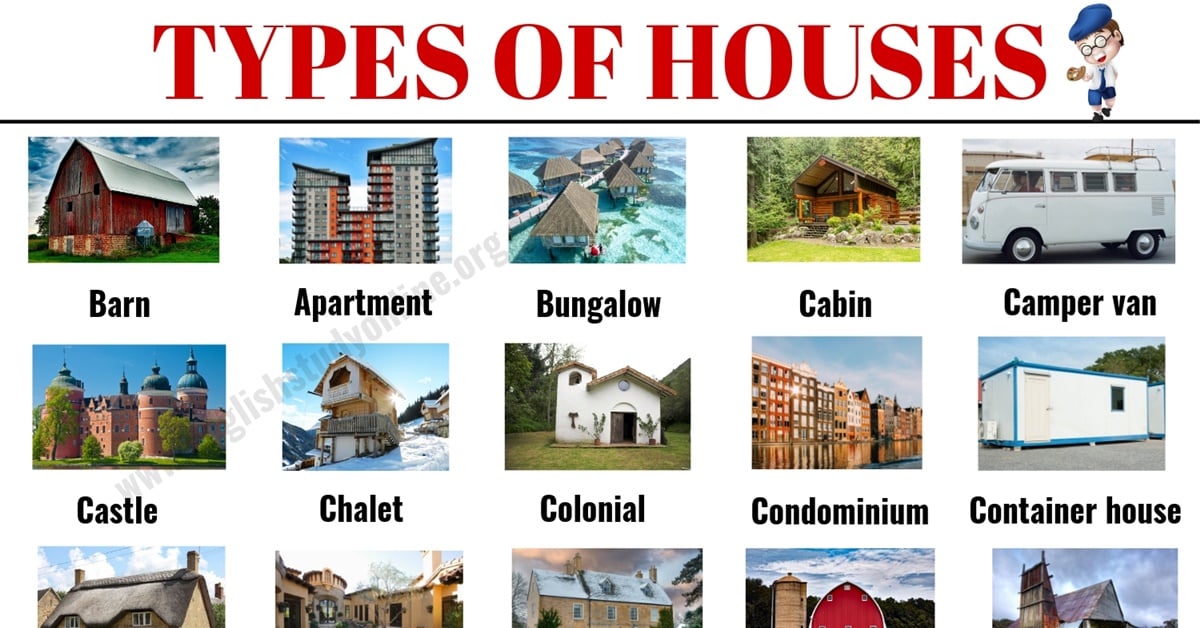 Types of Houses in English! List of 30 popular house styles with their explanations and pictures. Learn different home styles to improve your vocabulary words in English.

What is a house?

A house is a building that functions as a home. They can range from simple dwellings such as rudimentary huts of nomadic tribes and the improvised shacks in shantytowns to complex, fixed structures of wood, brick, concrete or other materials containing plumbing, ventilation, and electrical systems.

In other words, it is a building for human habitation, especially one that is lived in by a family or small group of people.

Here is the list of houses styles in English with brief explanations:

Styles of Houses with Example Sentences

People were using a barn structure as a house and a stable at the same time, gaining all the benefits of living in close quarters with animals. They were simple to build and customize to an owner’s needs with a few different styles depending on the region.

A suite of rooms forming one residence, typically in a building containing a number of these.

A low house, with a broad front porch, having either no upper floor or upper rooms set in the roof, typically with dormer windows.

A small shelter or house, made of wood and situated in a wild or remote area.

A campervan (or camper van), sometimes referred to as a camper, or a caravanette is a self-propelled vehicle that provides both transport and sleeping accommodation. The term mainly describes vans that have been fitted out, often with a coach built body for use as accommodation.

A large building, typically of the medieval period, fortified against attack with thick walls, battlements, towers, and in many cases a moat.

A wooden house or cottage with overhanging eaves, typically found in the Swiss Alps.

The Colonial home is one of the most popular styles of home in the United States. The homes are symmetrical, or square, and feature an entry door that can be found in the middle of the front of the home. The style also features two windows on either side of the entry door, with five windows on the second floor, with one directly above the entry door.

A condominium, often shortened to condo, in the United States and in most Canadian provinces, is a type of living space similar to an apartment but independently sellable and therefore regarded as real estate.

Container homes made from the steel shipping containers that you see carrying goods everywhere on trains, trucks, and ships.

A cottage is, typically, a small house. It may carry the connotation of being an old or old-fashioned building. In modern usage, a cottage is usually a modest, often cosy dwelling, typically in a rural or semi-rural location.

A courtyard house is a type of house—often a large house—where the main part of the building is disposed around a central courtyard.

A house that is not joined to any other house.

A dormitory (often abbreviated to dorm) is a building primarily providing sleeping and residential quarters for large numbers of people such as boarding school, high school, college or university students.

A farmhouse is a building that serves as the primary residence in a rural or agricultural setting.

A gable front house, also known as a gable front house or front gable house, is a vernacular (or “folk”) house type in which the gable is facing the street or entrance side of the house. Many gablefront houses contain front porches.

A hut is a small house with only one or two rooms, especially one which is made of wood, mud, grass, or stones.

An igloo, also known as a snow house or snow hut, is a type of shelter built of snow, typically built when the snow is easy to compact.

A lighthouse is a tower, building, or other type of structure designed to emit light from a system of lamps and lenses and to serve as a navigational aid for maritime pilots at sea or on inland waterways.

A manor house or fortified manor-house is a country house, which has historically formed the centre of a manor; the principal house of a landed estate.

A mansion is a large dwelling house. Manor comes from the same root.

A mobile home (also trailer, trailer home, house trailer, static caravan, residential caravan) is a prefabricated structure, built in a factory on a permanently attached chassis before being transported to site (either by being towed or on a trailer). Used as permanent homes, or for holiday or temporary accommodation, they are left often permanently or semi-permanently in one place, but can be moved, and may be required to move from time to time for legal reasons.

A semi-detached house (often abbreviated to semi) is a single family dwelling house built as one of a pair that share one common wall. Often, each house’s layout is a mirror image of the other.

A skyscraper is a continuously habitable high-rise building that has over 40 floors and is taller than approximately 150 m.

A split-level home (also called a tri-level home) is a style of house in which the floor levels are staggered. There are typically two short sets of stairs, one running upward to a bedroom level, and one going downward toward a basement area.

A portable shelter made of cloth, supported by one or more poles and stretched tight by cords or loops attached to pegs driven into the ground.

A house built as part of a continuous row in a uniform style; a row house.

A tower is a tall structure, taller than it is wide, often by a significant margin. Towers are distinguished from masts by their lack of guy-wires and are therefore, along with tall buildings, self-supporting structures.

A tree house, tree fort or tree shed is a platform or building constructed around, next to or among the trunk or branches of one or more mature trees while above ground level. Tree houses can be used for recreation, work space, habitation, and observation.

A large and luxurious country house in its own grounds.

An establishment providing accommodations, meals, and other services for travelers and tourists.

Octagon houses were a unique house style briefly popular in the 1850s in the United States and Canada. They are characterised by an octagonal (eight-sided) plan, and often feature a flat roof and a veranda all round.

Different Types of Houses with Their Pictures in English 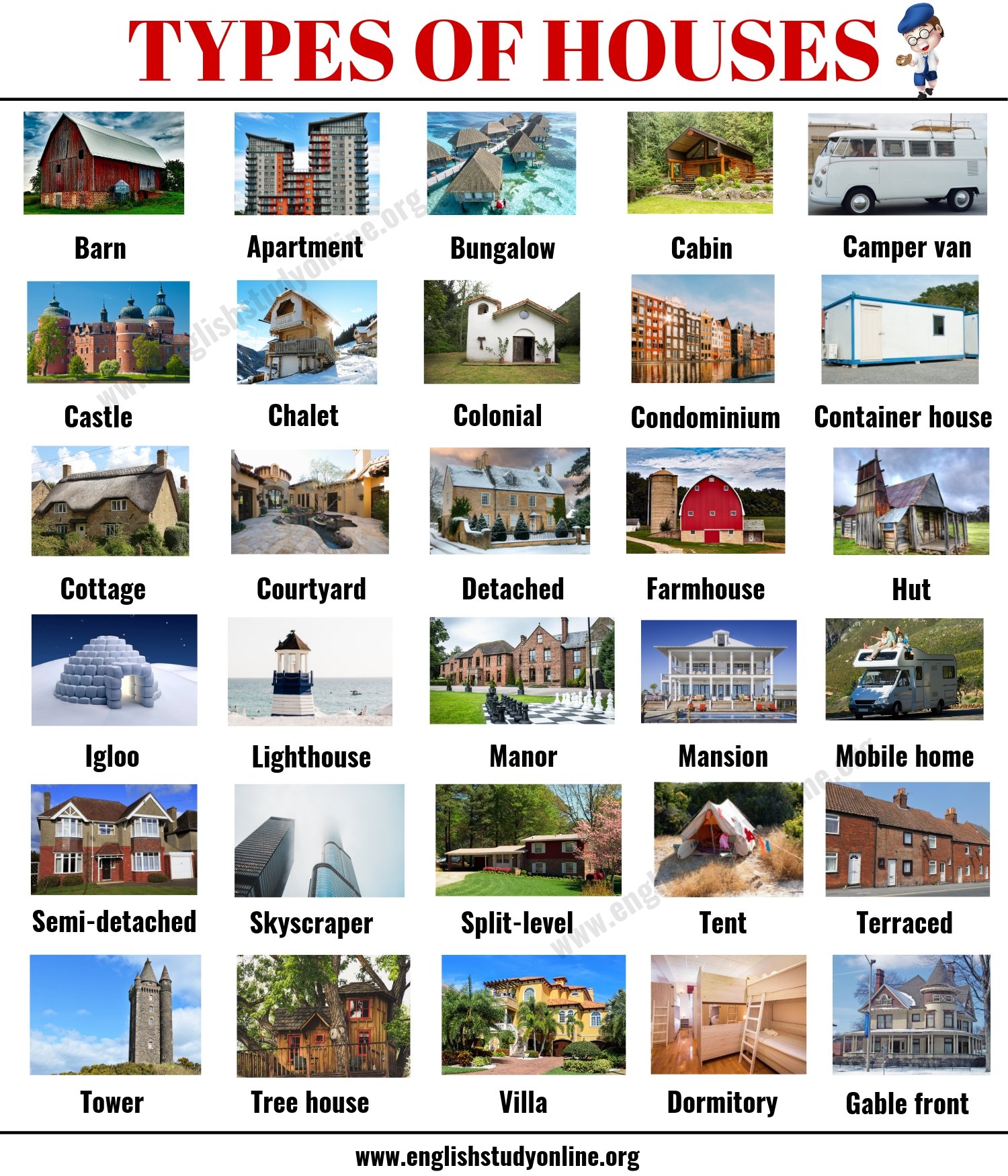